Pursuant to section14 (i.e., law enforcement), certain information may not be included in this report. This information may include, but is not limited to, the following:

Pursuant to section 21 (i.e., personal privacy), protected personal information is not included in this report. This information may include, but is not limited to, the following:

Other proceedings, processes, and investigations

This report relates to the SIU’s investigation into the discharge of a firearm by the police at a 43-year-old woman (the “Complainant”).

On February 3, 2021, at about 10:45 p.m., the PRP responded to a residence near Tomken Road and Bloor Street in relation to a woman in distress. The woman had attended the address, armed herself with a knife, and would not let the occupants leave the residence. The woman began cutting at her wrists and then locked herself in an upstairs bathroom. Both uniform and tactical police officers attended the scene. Tactical officers were able to partially open the bathroom door and deploy pepper spray. Once further into the bathroom, police officers deployed a controlled energy weapon (CEW) and ARWEN, disarmed the woman, and took her into custody. The woman was subsequently taken to a hospital in Mississauga.

The Complainant was interviewed on February 4, 2021.


[Note: An affected person (complainant) is an individual who was involved in some form of interaction with an official or officials, during the course of which the individual sustained serious injury, died, was reported to have been sexually assaulted, or was shot at by a firearm discharged by an official.]

The civilian witness was interviewed on February 4, 2021.


SO Declined interview and to provide notes, as is the subject official’s legal right


[Note: A subject official is an official (whether a police officer, a special constable of the Niagara Parks Commission or a peace officer with the Legislative Protective Service) whose conduct appears, in the opinion of the SIU Director, to have been a cause of the incident under investigation.


[Note: A witness official is an official (whether a police officer, a special constable of the Niagara Parks Commission or a peace officer with the Legislative Protective Service) who, in the opinion of the SIU Director, is involved in the incident under investigation but is not a subject official in relation to the incident.


On February 4, 2021, an SIU Forensic Investigator attended a two-storey home near Tomken Road and Bloor Street. The front door led into a foyer. A set of stairs led to the upstairs where there were bedrooms and a bathroom. The bathroom was across the hall at the top of the stairs. There was a quantity of a white powder all over the hallway and the bathroom floor.

A red blood-like substance was noted on the bathroom floor by the door hinge as well as the tile floor and side of the bathtub at the far end of the bathroom. 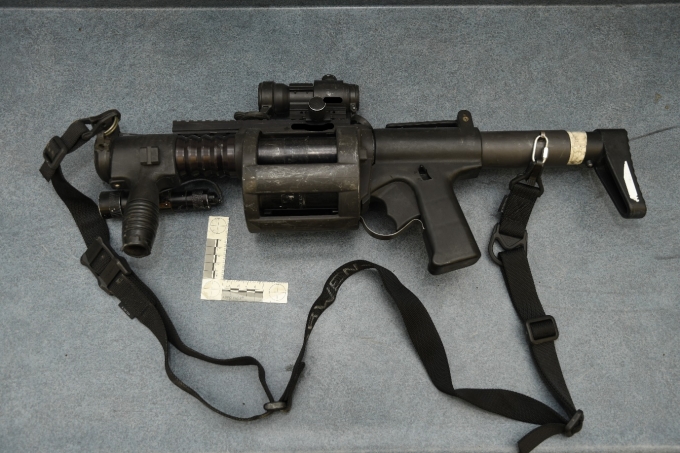 
On February 4, 2021, the following items were collected by an SIU Forensic Investigator:


The CEW was downloaded and a report generated. There were two cartridges in the weapon. On February 4, 2021, the CEW was test-fired and the files were interpreted with respect to time of firings of the CEWs and duration of discharge.


There were approximately 17 events in which the CEW was in arc mode.


On February 3, 2021, the Complainant called the police on three occasions about her building. She indicated that she had lived in the apartment building for five years and had not seen her friends but heard voices outside her unit, which she did not want to listen to.

The Complainant was concerned about being robbed and that she could not sleep at night. When the call-taker asked her if she had any mental health issues, she replied, “No.”


Upon request, the SIU received the following materials and documents from the PRP between February 4 and 8, 2021:

The material events are clear on the evidence collected by the SIU and may be briefly summarized.

At about 10:45 p.m., the PRP received a 911 call from the CW calling to report a disturbance at her home near Tomken Road and Bloor Street, Mississauga. According to the CW, a friend of hers, the Complainant, was at her residence threatening to take her own life. She noted that the Complainant was in possession of a knife, which she refused to put down, and would not let anyone open the front door. Also present in the home were the CW’s two children. Officers were dispatched to the address.

Uniformed officers were the first to arrive at the address followed closely by a tactical team, the latter consisting of WO #1, the SO, and WO #3 and WO #2. The Complainant had locked herself inside the second-floor bathroom by this time. The CW and her kids were removed from the home and the team of tactical officers took up positions on the staircase to the second floor. The Complainant was non-responsive as officers encouraged her to exit the bathroom, a short distance across a hall from the top of the stairs, with her hands empty.

Growing increasingly concerned with the Complainant’s well-being, particularly when they noticed blood on the floor under the bathroom door, WO #1 decided to force entry into the room. The SO kicked at the door and dislodged the doorknob from its place. Through the opening where the doorknob used to be, WO #1 deployed Oleoresin Capsicum (OC) powder via his gas launcher. The substance did not appear to have any effect on the Complainant, who was seen standing in the bathroom, but she did move away from the door allowing the officers to fully open it.

Following her arrest, the Complainant was taken to hospital where she was admitted for psychiatric examination.

A bloodstained black-handled knife, with a blade measuring 21 centimetres in length, was recovered from the scene.

is, if he acts on reasonable grounds, justified in doing what he is required or authorized to do and in using as much force as is necessary for that purpose.

and in addition the police officer is of the opinion that the person is apparently suffering from mental disorder of a nature or quality that likely will result in,

and that it would be dangerous to proceed under section 16, the police officer may take the person in custody to an appropriate place for examination by a physician.

On February 4, 2021, the PRP contacted the SIU to report that one of their officers – the SO – had fired an ARWEN at the Complainant. The SIU opened a file and the SO was identified as a subject official for purposes of the investigation. On my assessment of the evidence, there are no reasonable grounds to believe that the SO committed a criminal offence in connection with the ARWEN discharge.

Pursuant to section 25(1) of the Criminal Code, police officers are immune from criminal liability for force used in the course of their duties provided such force was reasonably necessary in the execution of an act that they were authorized or required to do by law. By all accounts, the Complainant was unwell and in mental distress at the time of these events. Believing she was in danger from unknown persons, she had sought refuge at a friend’s home. The Complainant’s paranoia escalated, however, to the point that she armed herself with a knife and threatened to take her own life. Concerned for the Complainant’s well-being, the CW called police and conveyed what was happening. In the circumstances, I am satisfied that the Complainant was subject to lawful apprehension under section 17 of the Mental Health Act.

Thereafter, I am unable to reasonably conclude that the force used by the officers and, in particular, the SO’s ARWEN discharges, was excessive. The Complainant was harming herself with a knife and prompt action was required if serious injury or death was to be averted. One or more of the officers could have rushed into the bathroom to overwhelm and disarm the Complainant with physical force, but that would have placed the officers within arm’s reach of someone armed with a weapon capable of inflicting lethal injury. Instead, they decided, reasonably in my view, to attempt to incapacitate the Complainant from a distance with the use of less-lethal force. Here too, the force deployed by the officers was not indiscriminate. Rather, the ARWEN discharges came only after OC gas and CEW discharges had proven ineffective in neutralizing the threat.

In the result, as I am satisfied that the SO used no more force than was reasonably necessary to safely take the Complainant into lawful custody, there is no basis for proceeding with charges in this case and the file is closed.