The Special Investigations Unit is a civilian law enforcement agency that investigates incidents involving police officers where there has been death, serious injury or allegations of sexual assault. The Unit’s jurisdiction covers more than 50 municipal, regional and provincial police services across Ontario.

Freedom of Information and Protection of Privacy Act (“FIPPA”)

Pursuant to PHIPA, any information related to the personal health of identifiable individuals is not included.

Information may have also been excluded from this report because its release could undermine the integrity of other proceedings involving the same incident, such as criminal proceedings, coroner’s inquests, other public proceedings and/or other law enforcement investigations.

The Unit’s investigative jurisdiction is limited to those incidents where there is a serious injury (including sexual assault allegations) or death in cases involving the police.

“Serious injuries” shall include those that are likely to interfere with the health or comfort of the victim and are more than merely transient or trifling in nature and will include serious injury resulting from sexual assault. “Serious Injury” shall initially be presumed when the victim is admitted to hospital, suffers a fracture to a limb, rib or vertebrae or to the skull, suffers burns to a major portion of the body or loses any portion of the body or suffers loss of vision or hearing, or alleges sexual assault. Where a prolonged delay is likely before the seriousness of the injury can be assessed, the Unit should be notified so that it can monitor the situation and decide on the extent of its involvement.

This report relates to the SIU’s investigation into the serious injury sustained by a 60-year-old man (the “Complainant”).

The OPS advised that OPS officers were involved in a pursuit at 4:55 a.m. involving a stolen 2019 Toyota 4Runner with stolen Quebec licence plates. The pursuit started in Ottawa and proceed for about 20 minutes to the town of Embrun. The Complainant lost control and rolled the Toyota in a roundabout entering Embrun. The Complainant was taken to Montfort Hospital, where he was released at 9:15 A.M., with minor injuries. The scene was released after the minor injury diagnosis; only photographs were taken by a Scenes of Crime Officer.

The Complainant continued to complain of pain and was returned to the hospital where X-rays and an MRI were completed. The Complainant was eventually diagnosed with a burst fracture of T6 at 3:13 p.m. and transferred to Ottawa Civic Hospital, where he was under guard. The cruiser was being held pending the interview with the Complainant.

[Note : A complainant is an individual who was involved in some form of interaction with police, during the course of which she or he sustained serious injury, died or is alleged to have been sexually assaulted.]


[Note : A witness officer is a police officer who, in the opinion of the SIU Director, is involved in the incident under investigation but is not a subject officer.

Upon request by the SIU, witness officers have a duty under Ontario Regulation 267/10 of the Police Services Act, to submit to interviews with SIU investigators and answer all their questions. The SIU is also entitled to a copy of their notes from the police service.]


SO Declined interview and to provide notes, as is the subject officer’s legal right


[Note : A subject officer is a police officer whose conduct appears, in the Director’s opinion, to have caused the death or serious injury under investigation.

Subject officers are invited, but cannot be legally compelled, to present themselves for an interview with the SIU and they do not have to submit their notes to the SIU pursuant to Ontario Regulation 267/10 of the Police Services Act.]


Highway 417 is a 400-series highway. It connects Ottawa with Montreal, with two divided asphalt lanes of travel in each direction. The highway contains urban and rural portions. Unless posted otherwise, the speed limit on Highway 417 was 100 km/h.

Embrun is located eight kilometres south of Highway 417 off of exit #88, which provides access to Embrun via St. Guillaume Road. This roadway is comprised of two asphalt lanes, one travelling in a northerly direction and the other in a southerly direction.


The OPS provided the following table that contained the Global Positioning Satellite (GPS) data recorded for the SO’s cruiser during this incident: 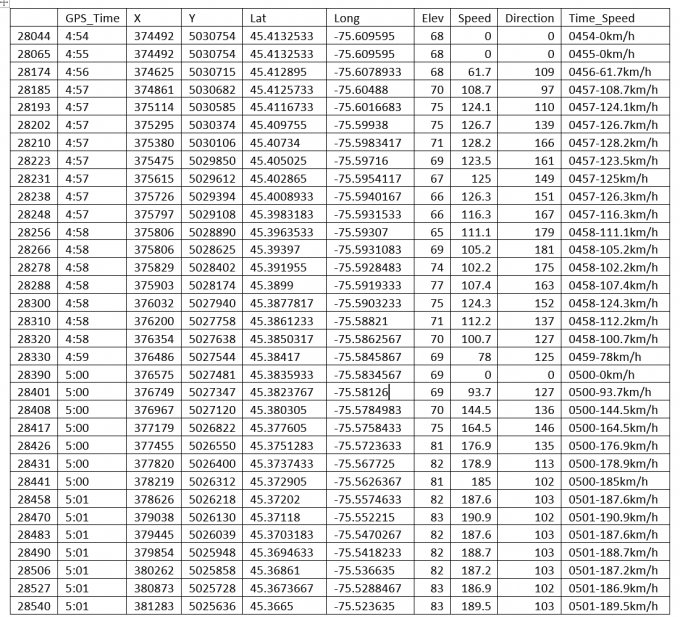 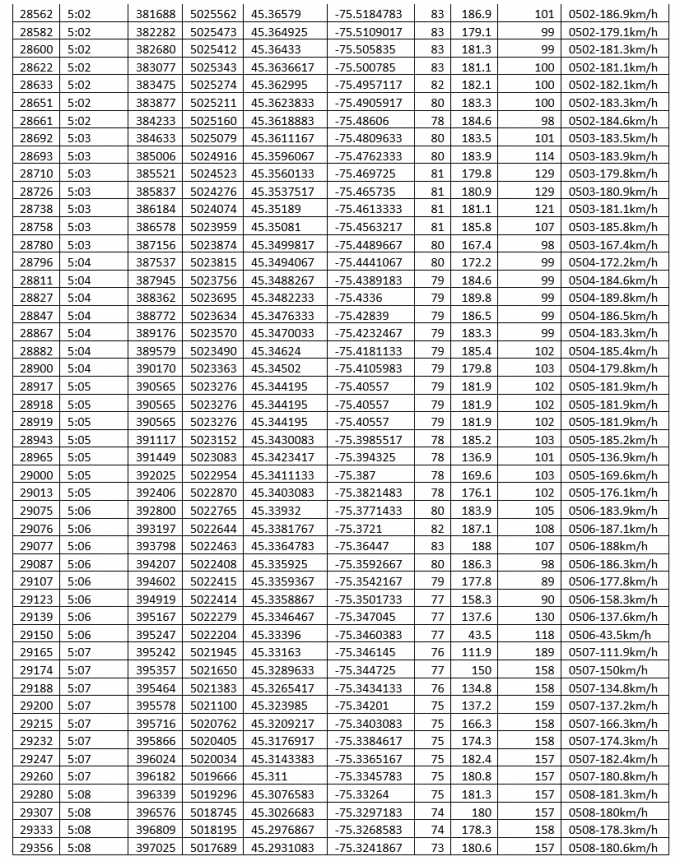 
On June 28, 2019, an SIU investigator contacted a gas station located at St. Guillaume Road. The investigator recorded a short video to his cell phone from the station’s closed-circuit television system.


The OPS provided the following four communications files. A summary of the salient points are as follows.


Upon request, the SIU obtained and reviewed the following materials and documents from the OPP and the OPS:

The SIU also obtained and reviewed the Complainant’s medical records from hospital.

The material events in question are uncontested on the evidence gathered by the SIU and may be summarized in short order. The SO, while on patrol in an unmarked cruiser traveling east on Highway 417, stopped the Complainant, operating a Toyota SUV, in the area of Hunt Club Road. The officer had performed a check on the vehicle and learned that its licence plate should be attached to an Infinity vehicle. In fact, the Complainant was driving a stolen vehicle. As the SO exited his cruiser to approach the Toyota SUV, the Complainant accelerated away eastward on the highway at high speed. The SO returned to his cruiser and followed suit.

The pursuit continued at very high speeds east along Highway 417 for approximately 20 kilometres before the vehicles exited onto southbound St. Guillaume Road. The SO was joined on St. Guillaume Road by WO #3 and WO #4 of the OPP, responding to an OPS request for assistance, who took positions behind the SO. The pursuit continued another seven to eight kilometres at high speed until the Complainant failed to negotiate the roundabout at Highway 3 (Notre Dame Street) and rolled over.

The SO and WO #3 brought their cruisers to a stop at the roundabout and approached the Complainant in his vehicle. The Complainant was removed from the wreckage, arrested and taken to hospital.

(b) a police department vehicle being used in the lawful performance of a police officer’s duties.

320.13 (2) Everyone commits an offence who operates a conveyance in a manner that, having regard to all of the circumstances, is dangerous to the public and, as a result, causes bodily harm to another person.

The Complainant was involved in a motor vehicle collision in the morning of June 24, 2019 and suffered a fractured vertebra in the process. He was fleeing police officers pursuing him south on St. Guillaume Road toward Embrun. The SO of the OPS was the lead police officer in pursuit and identified as the subject officer in the SIU investigation. On my assessment of the evidence, there are no reasonable grounds to believe that the SO committed a criminal offence in connection with the circumstances surrounding the collision and the Complainant’s injuries.

The offence that arises for consideration as far as the SO’s potential criminal liability is concerned is dangerous driving causing bodily harm contrary to section 320.13(2) of the Criminal Code. As an offence of penal negligence, the crime is predicated, in part, on conduct that amounts to a marked departure from the level of care that a reasonable person would have exercised in the circumstances. While there are aspects of the SO’s conduct throughout his engagement with the Complainant that are subject to legitimate scrutiny, I am unable to reasonably conclude on the totality of the evidence that he transgressed the limits of care prescribed by the criminal law.

While eastbound on Highway 417, the SO’s speeds were generally in excess of 180 km/h and topped out at about 190 km/h for a brief period. On St. Guillaume Road, the SO reached a top speed of about 183 km/h. Needless to say, these velocities, significantly over the 100 km/h and the predominantly 80 km/h speed limits on the highway and St. Guillaume Road, respectively, represented an inherent danger on the roadway. That danger, and the overall risk to public safety that it represented, in my view, was exacerbated by the reason for the pursuit in the first place, namely, an improper licence plate and possibly stolen vehicle. In other words, the Complainant was not wanted for some violent offence and in need of immediate apprehension to thwart an articulable risk to the public. It was further exacerbated by what appears to have been the close distance the officer maintained with the Toyota SUV, at least at points in the pursuit. For example, the camera that captured a short snippet of the pursuit as it travelled south on St. Guillaume Road showed the cruiser about two seconds behind the Complainant. Travelling as fast as they were, the SO left himself little margin for error given the proximity of the vehicles.

On the other hand, it bears noting that officers engaged in the lawful course of their duties are exempt from the speed limit pursuant to section 128(13) of the Highway Traffic Act. Whether or not the SO was in breach of the regulation that governs police pursuits in the province – O. Reg. 266/10 – he was ostensibly acting to enforce the law when he attempted to stop a stolen vehicle with improper licence plates. In the circumstances, while the speed exemption does not give police officers free rein to speed as they wish without regard to public safety considerations, it is a mitigating factor in the criminal liability analysis. The fact that Highway 417 and St. Guillaume Road were dry with little to no vehicles on them and there were few if any pedestrians in the vicinity of the pursuit further attenuates the dangers created by the speeding vehicles. Thus, there is no evidence that the risks created by the speeds were reflected in any demonstrable danger having been visited upon a nearby motorist or pedestrian. Finally, the record establishes that the SO updated the communications centre with his speeds, traffic and road conditions, and direction of travel. This allowed WO #1, with command over the pursuit, to make an informed decision about whether it should be called off. WO #1 was of the view that the pursuit could safely be continued right until the point of the collision, cautioning that the SO should back off a distance with the approach toward the roundabout. In fact, the SO reduced his speed markedly, from about 180 km/h to 140 km/h, as the pursuit approached the site of the collision. There are two points to make from this. First, while it may be that the SO fueled the Complainant’s reckless driving to an extent by maintaining a close distance between their vehicles, it cannot be said that he drove the Complainant into the roundabout given his significant deceleration as they approached the collision site. Second, regardless of the merits of WO #1’s decision, and acknowledging that the SO had an independent duty to terminate the pursuit if the public was being placed at undue risk, the fact that the sergeant did not intervene militates in favour of the SO.

In the final analysis, while the SO may well have fallen short by operating an unmarked cruiser at very high speed over a protracted period of time for a property offence, I am not satisfied that his indiscretions were sufficiently wanting, weighed against the extenuating circumstances, as to markedly deviate from a reasonable level of care. Accordingly, there is no basis for proceeding with charges in this case and the file is closed.